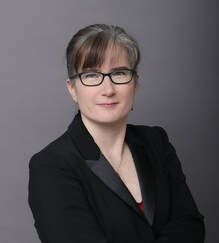 Elizabeth Hering has been the Director of Bands for Churchill High School since 2000.  She received a Master of Music from the Northwestern University School of Music in Evanston, IL and a Bachelor of Music from Willamette University in Salem, Oregon.

Mrs. Hering is a three time National Finalist for the GRAMMY Music Educator Award, having been in the top ten in  2019, 2020, and 2021, She is also a four time MSBOA District 12 Director of the Year, having been named the Band Director of the Year in 2013 and 2020, and Orchestra Director of the Year in 2005 and in 2009.  She has been an EMU Exceptional Educator Nominee, and a Michigan Music Conference clinician.   She has maintained involvement with the Michigan School Band and Orchestra Association at the District and State levels by serving on the District 12 Executive board since 2009, (becoming only the second female D12 president in the 85 year history of MSBOA) and is currently the State Vice President of Music Selection.  Through her service to MSBOA, Mrs. Hering has been at the forefront of several important projects. This includes the founding and continuous administration of a mentor project that partners current directors in SE Michigan with retired directors for a unique professional growth and development experience; a project that has since been adopted by many districts statewide.  She also wrote zero tolerance discrimination and sexual harassment policy that was adopted by the State in 2019.

Mrs. Hering's primary instrument is trumpet and she has performed with ensembles in Oregon, Washington, Colorado, Nevada, Illinois, New York, and Michigan.  Mrs. Hering's proudest "productions" are her three children Teagan, Gabriel, and Kai.  Her husband, Kirk, is a reformed percussionist turned organic chemist who does research and development for a chemical company in Ann Arbor.  ​ 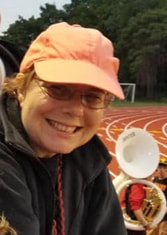 Mrs. Kilgore is the orchestra director at Churchill, where she also assists with the symphony and marching bands. During off-duty hours, she gigs extensively as a jazz saxophonist in metro-Detroit.

Prior to coming to Livonia, Mrs. Kilgore was instructor of clarinet at Northern Illinois University, where she performed as both an orchestral and jazz musician throughout the Chicago area. 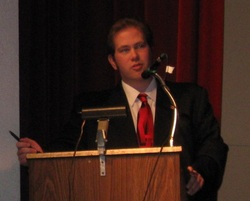 Phil has been Field Director of the CHS Marching Band since 1997. He has served as Vice President of the CHS Music Boosters since 2010, the Voice of the CHS Marching Band since 2011, and Band Camp Administrator since 2014..He is a 1997 Magna Cum Laude graduate of CHS and marched trumpet with the band for all four years.  He was extensively involved in all of the music groups while a student at Churchill from Choralation to Wind Ensemble. He was awarded the Instrumental Music Service Award at Honors Night his senior year.  Phil served as assistant youth choir director at St. Michael Parish of Livonia from 1993 to 1997.  He currently performs as a guest vocalist and instrumentalist and is also an active member of Paul's Players (a Livonia Community Theater group founded by retired Livonia teacher Patricia Hutchison) since 2011.  He has studied music as a non-music major taking courses and clinics at: The University of Michigan-Dearborn, The University of Michigan-Ann Arbor, Schoolcraft College, Eastern Michigan University, and Michigan State University.

He has been a member of Livonia CERT (Community Emergency Response Team) since 2008, working with the City of Livonia, the Livonia Police Department and the Livonia Fire Department in the capacity of Hometown Security and Emergency Preparedness.  He was awarded the President's Volunteer Service Award in February of 2012.   He is currently completing an Engineering Degree at the University of Michigan-Dearborn and has been employed in Domestic Ground Operations at FedEx Express in Novi since 2008.  He currently resides in Livonia, is the proud son of Laura and Philip, brother of Susan and Joseph (Erin) and proud Godfather to Nolan, Brayden, and Alex. 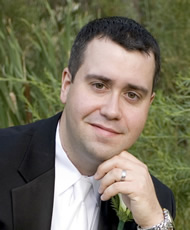 Chuck Ricotta has the been the Churchill High School drumline and percussion ensemble instructor since 2005.  He is also the percussion instructor for the University of Michigan Marching Band.  Chuck Ricotta has served as the percussion instructor and arranger for the University of Michigan Marching Band Drumline since 2002. Chuck also serves on the music faculty for Concordia University in Ann Arbor as well as serving as principal percussionist for the Flint Symphony Orchestra of Flint, Michigan.
Chuck has been a guest performer with numerous Michigan orchestras including the Detroit Symphony Orchestra, the Michigan Opera Theatre, the Ann Arbor Symphony and the Saginaw Bay Symphony. He has also appeared with the New World Symphony of Miami Beach, and the National Repertory Orchestra of Breckenridge, Colorado. In 2004, Chuck participated in the performance and recording of William Bolcom's Songs of Innocence and Experience under the baton of Leonard Slatkin at Hill Auditorium in Ann Arbor. The CD, available on the Naxos label, was the recipient of 4 Grammy Awards including Best Classical Recording.

Chuck is a former member and staff member of the Phantom Regiment Drum and Bugle Corps from Rockford, Illinois. In addition, he has also served on the instructional and design staff of the Penn State University Indoor Drumline during their run as WGI Independent Open champions and Independent World finalists. Chuck is active as a percussion ensemble director, clinician and consultant for several local schools and organizations in the southeast Michigan area.
​
Chuck earned a Bachelor of Music Education Degree from Pennsylvania State University where he was awarded the Performer's Recognition Award. He earned a Master of Music degree in percussion performance from the University of Michigan.
Chuck is an Educational Artist for Yamaha Percussion, Zildjian Cymbals, Remo Drumheads, and Innovative Percussion. He resides in Ann Arbor, MI where he also maintains a private teaching studio. 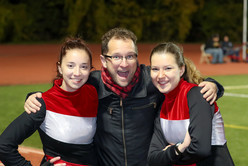 Iggi Courter, Color Guard Instructor
Iggi has been marching, spinning, dancing and doing theater since the age of 7.  He grew up on a farm in the middle of Michigan before moving to the Detroit Metro area.  He attended Lakeland High School and helped the marching band win their first Flight II gold medal at states in 1991. Yes, he is that olde. He went on to march with the Northern Aurora Drum and Bugle corp for two summers playing the contrabass.  He brings too many years of experience to count to this exciting new group.  His favorite color is orange.  He loves playing with Legos.  He has small feet (size 7) & hates shopping for shoes.  He currently works in the field of social work at a homeless shelter & doing HQS housing inspections.  In his free time loves spending time with his partner of 8+ years and playing fetch with his dogs Leyla & Ned.  iggi is pumped for the 2017 season!!! 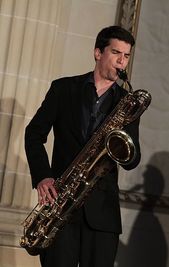 Prior to moving to Ann Arbor, Danny Hawthorne-Foss was active in the San Francisco music scene, playing at local jazz clubs, hotels, restaurants, street fairs, and public buildings as a member of jazz, salsa, and folk bands as well as classical chamber groups.  In 2011 Danny earned his Bachelor's degree in saxophone performance from the University of Michigan.  During his time in Ann Arbor, he has played with the University of Michigan Symphony Band, the University of Michigan Jazz Ensemble, and the Ann Arbor Symphony. A proponent of new music, Danny has premiered pieces at the 2009 and 2010 Midwest Composers Symposium at the Universities of Michigan and Cincinnati respectively.  In addition to the UM Symphony Band Album "Artifacts", he can be heard as a soloist on the album "Music in Pluralism" by New York composer William Zuckerman.  Danny plays the baritone saxophone for the Donald Sinta Quartet.

Danny has taught at summer marching band camps in Michigan, and regularly runs sectionals at local elementary, middle and high schools in Ann Arbor and surrounding areas.  He has also guest taught for the students of the Youth Orchestra of Los Angeles.  He maintains a private studio in San Francisco, and now teaches private lessons at the Arts in Motion Dance and Music Studio in Ann Arbor. He received his Bachelor of Music and Master's degree in saxophone performance from the University of Michigan where he studied with Donald Sinta.